Men are 70 to 100 times less likely to get breast cancer compared to women.

Though Rare, Men Can Get Breast Cancer Too

FacebookPinterestMessengerTwitterEmail
1 year ago| by Natalie Saunders

Male Breast Cancer Symptoms to Watch Out For

Most people associate breast cancer with women, but it can also affect men. Here’s all you need to know about male breast cancer symptoms and what to look out for.

What Is Male Breast Cancer?

Although breast cancer most often affects women, it can affect men too. According to the American Cancer Society, men are 70 to 100 times less likely to be affected than women, and the lifetime risk is around 1 in 833.

Both men and women are born with breast tissue. At puberty, female hormones cause this tissue to grow and develop into breasts. Although most men do not develop breasts, they still retain a small amount of breast tissue behind the nipple.

One of the first signs of male breast cancer is usually a lump behind or close to the nipple. This lump may vary in size, but it will usually be hard, painless, and non-moving.

However, there are various other reasons why men can develop lumps in their chest area, and most of these are benign (non-cancerous).

Lumps behind both nipples may be due to gynecomastia. This is a condition in which male breast tissue begins to grow, giving the appearance of small breasts. It can occur as a result of age (it is more common in teenagers and older men) or as a side effect of certain medications. It may also be a sign of hormonal imbalances due to:

Lumps in just one breast are more likely to be cancerous. However, they could also be harmless tissue masses, such as papillomas or fibroadenomas. Therefore, it is essential to have any breast lumps investigated and receive an accurate diagnosis.

As well as lumps in the breast tissue, male breast cancer can cause several other symptoms, including:

If breast cancer has begun to spread to other organs, it may also cause symptoms such as:

If any of these symptoms occur, make an appointment with a physician as soon as possible. The sooner male breast cancer is detected and treated, the better the chances of recovery. 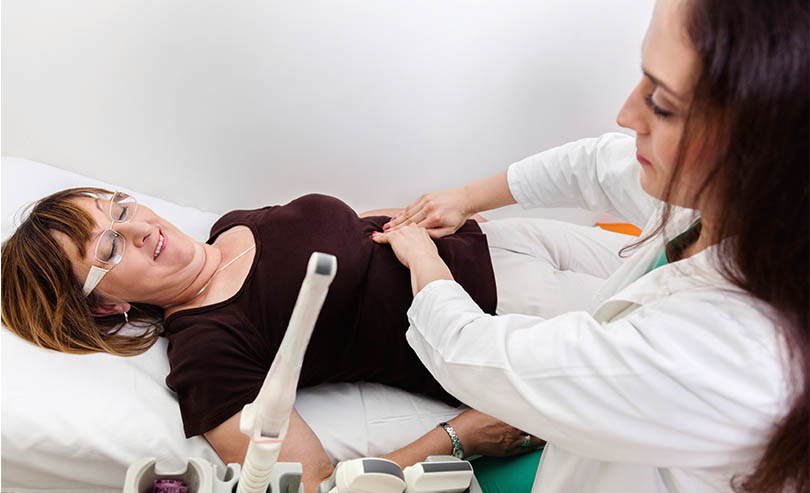 7 years ago| by Angie Finlay

Ovarian cancer is not the most common gynecological cancer, but it’s often the most deadly.

How to Detect Male Breast Cancer

To detect male breast cancer early, men should check their chest regularly for lumps or other changes. This is especially important if they have a family history of breast cancer or other risk factors (see below).

If a lump is found, the next stage is to have a breast exam with a physician who will check the tissue for lumps and other warning signs.

The doctor may then refer the patient for further screening. This might involve an ultrasound scan to check whether the lump is solid or fluid-filled, or a breast x-ray, known as a mammogram. This could be followed by a biopsy, in which a small sample of the lump is removed to test it for cancerous cells.

If cancer is detected, other possible screening techniques include computerized tomography (CT), positron emission tomography (PET), or bone scans to check whether it has spread to other parts of the body.

Male breast cancer can also be due to higher-than-average levels of the hormone estrogen. There are several possible reasons for this:

Exposure to certain medicines, chemical pesticides, or hormones used in farming could increase estrogen levels and raise the risk of breast cancer.

The liver plays a crucial role in maintaining the balance of hormones within the body. Therefore, liver disease such as cirrhosis (scarring), is another significant risk factor.

Obesity can raise estrogen levels in the body and increase the risk of developing breast cancer.

Men usually have a single X chromosome. However, people with Klinefelter syndrome may have up to four. Therefore, this condition can significantly increase estrogen production and raise the risk of male breast cancer.

Other possible risk factors include:

Treatment for male breast cancer will depend upon how advanced the disease is when it is detected. Options include surgery to remove the breast tissue (mastectomy), chemotherapy, radiation therapy, or a combination of these treatments. The estrogen-blocking drug tamoxifen may also be effective in some cases.

If male breast cancer is detected early enough, it is possible to make a full recovery. However, the condition tends to be diagnosed later in men than in women due to a lack of awareness. Therefore, it is essential to understand that men can get breast cancer too. They should perform regular self-examinations and have any symptoms investigated without delay.